Discoursing during the launch of Sanathana Sarathi…

From this day, our Sanathana Sarathi will lead to victory the cohorts of truth – the Vedas, the Sastras and similar scriptures of all faiths, against the forces of the ego such as injustice, falsehood, immorality and cruelty. This is the reason why it has emerged. This Sarathi will fight in order to establish world prosperity. It is bound to sound the paean of triumph when universal Ananda is achieved.

Started in 1958, Sanathana Sarathi is a monthly magazine devoted to Sathya (Truth), Dharma (Righteousness), Shanti (Peace) and Prema (Love) – the four cardinal principles of Bhagawan Baba’s philosophy. It is published from Prasanthi Nilayam (the Abode of Highest Peace) and acts as a mouthpiece of Baba’s Ashram as it speaks of the important events that take place in His sacred Abode, besides carrying Divine Messages conveyed through Divine Discourses of Bhagawan Sri Sathya Sai Baba.

The word meaning of Sanathana Sarathi is the ‘Eternal Charioteer’. It signifies the presence of the Lord in every being as the atma guiding their lives like a charioteer. It implies that he who places his life, the body being likened to a chariot, in an attitude of surrender in the hands of the Lord, will be taken care of by the Lord even as a charioteer would take the occupant of his chariot safely to its destination.The magazine is an instrument to disseminate spiritual knowledge for the moral, physical and mental uplift of humanity without any discrimination as the subject matter discussed therein is always of common interest and of universal appeal. The fifteen Vahinis – streams of sacredness – known as the Vahini Series comprising annotation and interpretation of the Upanishads and other scriptures, Itihasas like the Ramayana, the Bhagavatha and the Mahabharata, and authentic explanations on Dhyana, Dharma, Prema, etc., have been serially published in this magazine as and when they emanated from the Divine pen of Bhagawan Baba. This magazine is published in almost all Indian languages, English and Telugu from Prasanthi Nilayam and others from respective regions. Every year Sanathana Sarathi comes out with a special issue in November commemorating the Divine Birthday. The English and Telugu magazines are posted on the 10th and 23rd respectively, of every month, from Prasanthi Nilayam. This magazine has wide, ever increasing circulation in India as well as abroad, as the study of it brings the reader closer to the philosophy of the Avatar in simple understandable language.

Prof. N. Kasturi was the Editor of Sanathana Sarathi from its inception in 1958 till he attained the Divine Lotus Feet in the year 1987. The Professor whose genius had many pens in his pocket had written on the genesis of Sanathana Sarathi in his illustious autobiography, LOVING GOD. 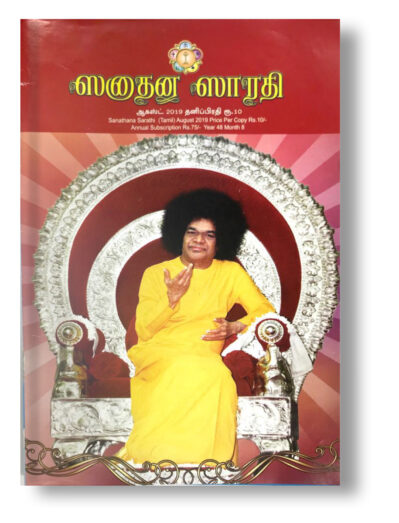