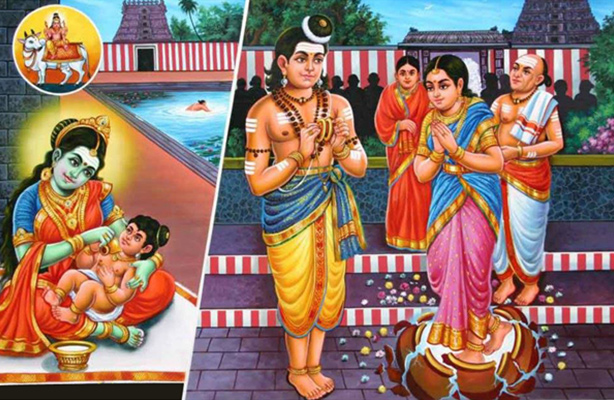 Sambandar, born in Sirkazhi to Shivapada Hrudayar and Bhagavathiar, is one of the four main nayanmars.

He was a bala yogi who lived in the seventh century. At the age of six, he began to express his spiritual dimension, singing praises of the lord. However, most of it have gone unrecorded.

When Sambandar was about three years old, his father had taken him to a nearby Shiva temple. When his father went to take a dip in the temple tank, the child started crying in hunger.

Noticing this, Lord Shiva and his consort Parvathi appeared before him and Goddess Parvathi fed him. After finishing his bath, the father came to the child, and found a golden cup in his hands (the cup in which Parvathy gave him the milk) and milk overflowing from his mouth. The father asked him who had fed him, whereupon the boy pointed to the sky and responded with a song “Thodudaya Seviyan” – the first verse of the thevaram, at the age of three!

Soon he started gaining hundreds of followers and supporters who would accompany him to various Shiva temples.

Sambandar went on pilgrimages to many sacred lands of Lord. On his way he met with Thiru Nilakanda Yazhppanar, who plays the string instrument Yazh.

It captivated the attention of Sambandar and Yazhppanar also desired to be in the company of Sambandar. In this way, Yazhppanar’s yearning to play for Sambandar’s songs praising the Lord became real. They both visited Chidambaram Lord Nataraja Temple. A large gathering of Thillai/ Thillai Anthanar were waiting for them at the southern entrance with Vedic hymn to receive the child of Lord.

Sambandar was absorbed in the beauty of Lord Nataraja and Goddess Sri Sivakami. He envisioned the Thillai Anthanars as the Ganas of Lord and prostrated before them. They both paid reverence to each other.

At some temples, devotees witnessed miracles because of the thevaram hymns sung by Sambandar. It is said he sang over 16,000 pathigams. But just 383 have been retrieved.

After visiting a number of shrines, Sambandar returned to Sirkazhi at the age of 16. His father wanted to get him married. Sambandar argued that it was necessary for him to engage himself in worship of Lord Shiva.

Yet, Shivapada Hrudayar selected the daughter of Nambandar Nambi of Nallur Perumanam, who welcomed the alliance. The wedding was to take place at Nallur Perumanam. Sambandar went to the temple, worshipped the Lord and got His blessings. Then he went to a Mutt nearby. The bride’s party came there to welcome the groom.

Sambandar, in his wedding dress, took his seat on a pearl palanquin. People accompanied him singing, “Long Live Sambandar.”

The wedding party came to the venue. Sambandar, holding his wife’s hand, went around the sacrificial fire (the manifestation of the Lord). Accompanied by the other Shiva devotees, the couple went into the temple and worshipped Shiva with total surrender. Sambandar sang a pathigam praying for liberation. The Lord blessed him, saying, “Oh Sambandar, you, your wife, and all those who witnessed your marriage will merge in the Shiva Jyothi and come to me.”

At once, an effulgent light emerged from the Lord. Before merging in that Light, Sambandar sang a pathigam. Then Sambandar and all those who were present, merged in the Light of Shiva.