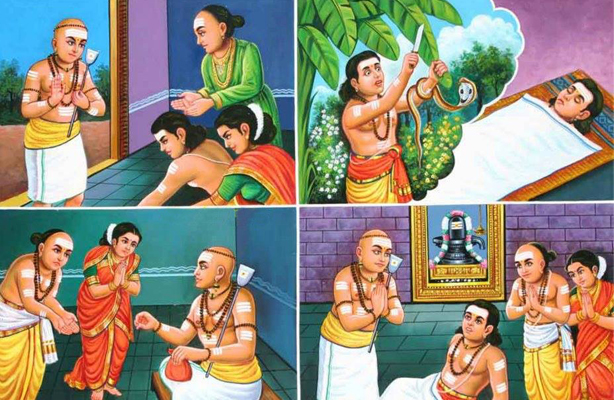 Appudi Nayanar was born in Thingaloor near Kumbakonam and was an ardent devotee of Lord Shiva. For the service of Shiva Bhaktas (devotees of Lord Shiva), he had constructed many water sheds. Appudi had heard about the glories of Thirunavukarasar (Appar) and had taken him as his Guru and worshipped him with utmost dedication.

Appudi’s joy knew no bounds and he requested the Nayanar to oblige by having food in his house. Appudi’s son who was also a devotee, went to the garden to bring a banana leaf for serving the food to the honoured guest. Alas! He was bitten by a snake. Yet, dutiful that he was, he went inside to give the leaf to his parents and then collapsed dead. Appudi and his wife were more concerned about serving their esteemed guest that they covered the body of their son with a carpet and went to serve the meal to. Such was their devotion! Thirunavukarasar noticed the absence of the boy and enquired about him. When he came to know that the boy was bitten by a snake, Thirunavukarasar broke into a Pathigam ‘Ondru Kolam’. The boy got up as though from a deep sleep.

Appudi had not wanted even the death of his own son to disrupt his hospitality for his Guru! Lord Shiva was so pleased that he blessed him with His grace.

Appudi’s devotion for his Guru was single pointed. He allowed nothing to come between him and his love for his Guru, Thirunavukarasar who led other Bhaktas to the Lord through his soulful hymns. Appudi appreciated the great qualities of his Guru and considered him to be a God. He not only meditated on the lotus feet of his Guru but ensured that the glory of his Guru was known to many. For this purpose, he named all his children ‘Tirunavukkarasu’. Appudi had devoted time and effort to build watersheds for the service of the pilgrims and even these sheds were named after his Guru. Rather than striving to become a well-known figure himself, he worked hard to make the world know about his revered Guru.